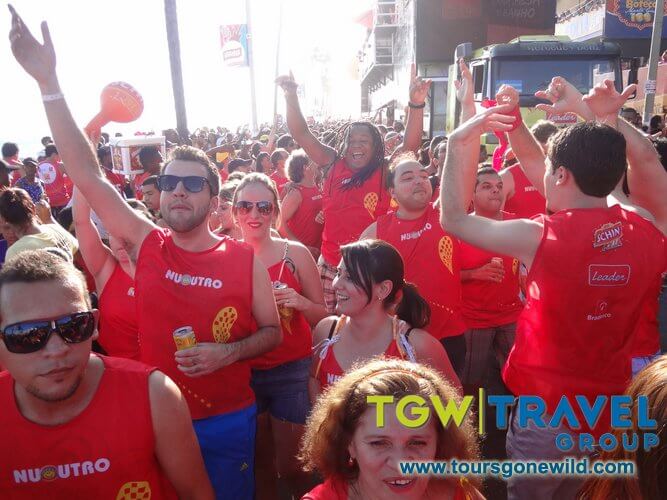 Carnival in Salvador is more about partying on the street. It has 3 different Carnival circuits, with the most popular being the Barra-Ondina Circuit. The parties are divided amongst blocos and camarotes. Camarotes are the VIP Parties during Carnival. They are elevated bandstands, where you can party and watch the Blocos/Trios passing by at eye level. The camarotes are equipped with great music, dance floors, DJs, food, bar, and of course beautiful Brazilian singles!!!!

The Blocos are formed by giant sound cars that carry the bands called Trio Eletrico and a support car with bathrooms, drinks, and medical assistance. The Bloco is surrounded by a rope guarded by almost 1000 security members specially oriented to protect people inside (associate) and keep non authorized people from getting in. Each Bloco consists of more than 3000 people that are easily identified by their uniform called Abada (also used for Camarotes). The singers and the band sing along the Avenues of Salvador with a very exciting crowd, dancing and having fun. The parade route is about 4 Kilometers. Check out Salvador Carnival Photo Gallery to see pictures from the parties.

If you are looking to go to the wildest Carnival in the world, we recommend you book TGW’s Carnival in Salvador  Bahia Travel Package. It’s a no-hassle way to experience Carnival and TGW has on-the-ground staff to make sure you have a vacation of a lifetime!

Check out the top songs/moments from Carnival in Salvador below to know what to expect.

1. U2 Surprise Guests – You never know what to expect in Carnival in Salvador. In 2006, U2 were special guests to Brazilian artist Gilberto Gil. They were partying it up and did an impromptu song of “No Woman, No Cry”. This was by far one of the coolest Carnival experiences we’ve ever had.

3. Ivette Sangalo – Ivette is the queen of Carnival in Salvador Bahia. She’s the best female performer and we’ll see her perform when we are at one of our camarotes.