If you are looking to travel to Rio de Janeiro Carnival, the Samba Parade at the Sambadrome is a can’t miss! It’s considered the Greatest Show on Earth and puts any Vegas show to shame! We put this guide to the Sambadrome together because we always get a ton of questions from our clients as far as the best places to sit in the Sambadrome as well as the explanation among all of the different sections.

In this guide to the Sambadrome, we’ll explain the difference among the numbered sections (or “sectors”) as well as the differences among the different sections to watch the parade.  If you would like to book any of the sections, please email us at info<at>toursgonewild.com or give us a call @ 786.522.3667.

What is the Sambadrome?

The Sambadrome (“Sambódromo” in Portuguese) is the name given to an exhibition place for the Samba Schools in Brazil. This is the area where the world-famous Rio Carnival parade that everyone has seen on TV/online with people in amazing costumes and floats actually takes place! Contrary to what some people assume, the Rio carnival (with the costumes and floats) is NOT near hotels or on the streets of Rio, but HERE in the “Sambadrome” where people must purchase Rio Carnival Tickets to view the parade.

The Sambadrome consists of spectator viewing areas surrounding a long alley for the schools to parade down. It’s a stadium built specifically for the Samba Parade during Rio Carnival.

The most famous Sambadrome in Brazil is in Rio de Janeiro – Sambadrome Marquês de Sapucaí. It’s located near downtown Rio and was built by world-famous architect Oscar Niemeyer. It consists of 700m stretch of the Marquês de Sapucaí street converted into a permanent parade ground with bleachers built on either side for spectators. Its capacity is 90,000. (other Sambadromes also exist in Sao Paulo and other cities, but the one in Rio is arguably the biggest and best in the world).

When does the Samba Parade for Rio Carnival take place?

The official Carnival parades take place just before the start of Lent (See Rio Carnival Dates till 2030). They are held for four consecutive nights, during which schools parade one after another from 8 pm until the morning (anywhere between 3 am & 5 am depending on delays). Due to the Covid-19 Pandemic, the Rio Carnival 2021 has been cancelled. The dates for Rio Carnival 2022 are set for February 25 – March 01, 2022.

When is the best night to go to the Sambadrome?

The Sambadrome has parades on Friday, Saturday, Sunday, and Monday of Carnival. Sunday and/or Monday are the best nights to go because they are the “Special Groups” and are the best Samba Schools that are competing against each other for the title of Carnival 2021. The samba schools on Friday and Saturday as quite good but have not officially qualified. For this reason, tickets to the Carnival in Rio on Friday or Saturday are cheaper than Sunday or Monday. Since most people only go to Carnival once in their lives, it is advisable to purchase tickets on Sunday or Monday

Do most people go to the Sambadrome every night?

No. Most people go only ONCE NIGHT – either Sunday or Monday. The show is amazing and a “must-see” attraction during Rio Carnival but since the parades last all night they can be a bit repetitive (not to mention expensive) to do more than one night. For this reason, we also offer amazing and exclusive parties during Carnival as most people do NOT go to the parade for more than one night! Click HERE for pictures from past parties to get an idea.

As far as which night is better (Sunday or Monday) – they typically are very similar and both are very good as the schools are split into two nights as they cannot all parade in one night.

Can I participate in the parade?

Yes! Most Samba Schools allow tourists to parade with them in the Sambadrome. You however MUST PURCHASE A COSTUME to parade. If you are interested in participating, please contact us and we will send you the available costume options or click HERE  for more info.

What are the Seating Options for Rio Carnival Sambadrome? 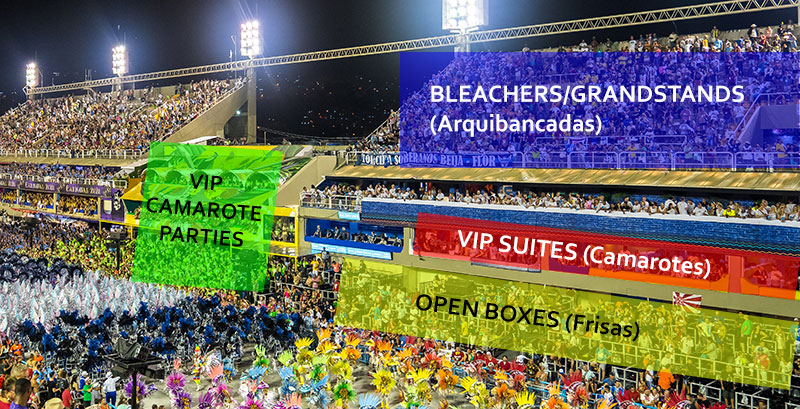 The Allocated Chairs are the least expensive options for Rio Carnival, but they are NOT RECOMMENDED because the views are restricted and they are located at the end of the parade (Sectors 12 & 13). By the time the samba schools reach these chairs, they have already passed the judges so the quality of their show will not be as good as other sections. We usually only sell these for special occasions on request or for Sector 13 as that is also the handicap section.

The Arquibancadas (bleachers) are the most popular and most animated place to watch Rio Carnival.  The tickets for these seats offer you a great view of the Parade as the concrete bleachers are at a high angle.   All Sections are “First Come, First Serve” (meaning NO RESERVED seats) and not numbered EXCEPT for section 9. Brazilians usually purchase these sections and this is the place to be if you want to be in the middle of the fun and party!

Section 9 (also known as the “Tourist” section) is a great option if you want a guaranteed seat and do not want to “scramble” to find a seat when you arrive or are not good being around a lot of people. Section 9 also has better infrastructure as far as bathroom facilities, and slightly better food options. For this reason, Section 9 is also more expensive and a little LESS lively than the other sections frequented by Samba loving locals!

Click Here to See the Differences between the Numbered Sectors. 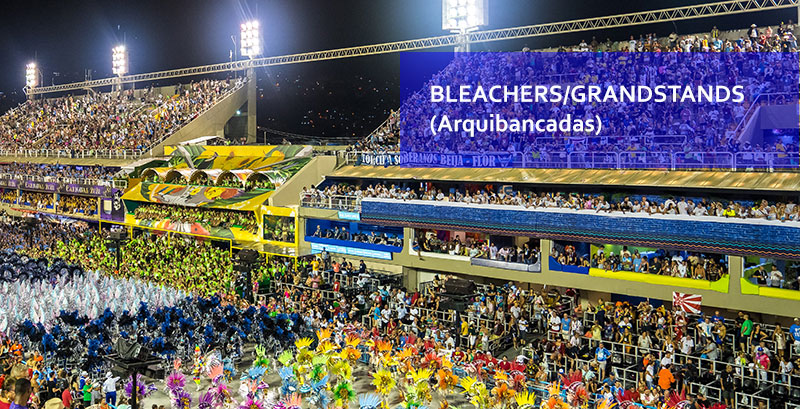 The Frisas (boxed chairs) are the closest seating you have to the parade as you are literally on the street /ground level versus the bleachers that are higher up.  The Frisas are basically like courtside seats at a basketball game. They are considered the best seating area to watch the parade up close.

Frisas are divided into four rows (A, B, C, and D) and all of them are actual numbered chairs that are set in an incline, so anywhere you can get a clear view of the show. Section A  is the closest to the Sambodromo Parade, and D is the last/furthest away. Many people like C or D as they are higher than A or B while others prefer A/B as they are closer to the street. 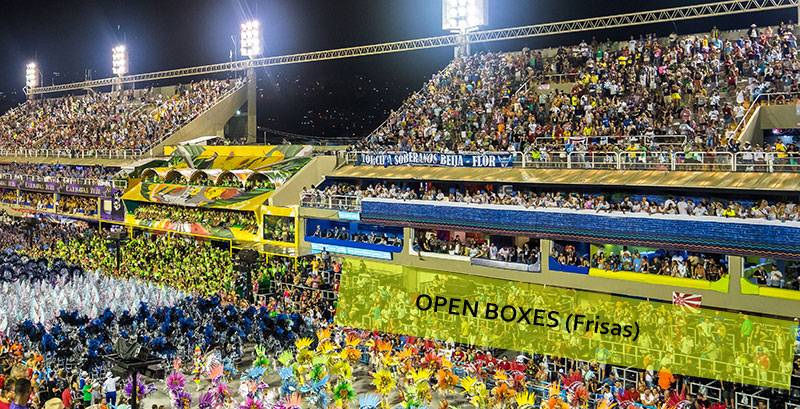 The Camarotes are located between the sectors, and also above the Frisas, right behind the last row (row D), and they have a perfect view of the Parade. The camarotes are by far the most exclusive place to be at the Sambodrome. They are all covered, on a high level, with a great view of the parade. The Camarotes also include VIP treatment, such as drinks, buffet, and catering all night. They also have air conditioning. Camarotes are ideal for privates groups, from 12 up to 108 people. They are spacious, with bars and sofas, and the most expensive option to check out the parade and are comparable to “corporate boxes” at a soccer or football game. To give you an idea, the pricing usually per person starts at $2,000USD. Camarotes are quite expensive and are often frequented by the wealthiest locals or in some cases celebrities and dignitaries. 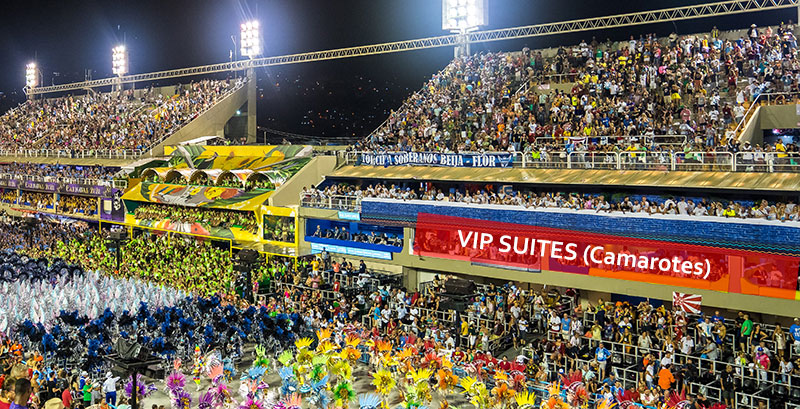 If you are looking to party while watching the Rio Carnival Parade, VIP Camarote Parties are the way to go. One of the cool concepts that started a couple of years ago was the Rio Carnival Party/Lounge Theme at the Rio Samba Parade. They are similar to Camarotes, which have been around for a while, in that they provide a more exclusive way of seeing the Rio Carnival, but provide party-goers different environments where they can party as well as their own entertainment. These parties also include Open Bar & Food. Check out the Folia Tropical Camarote Party we offer. 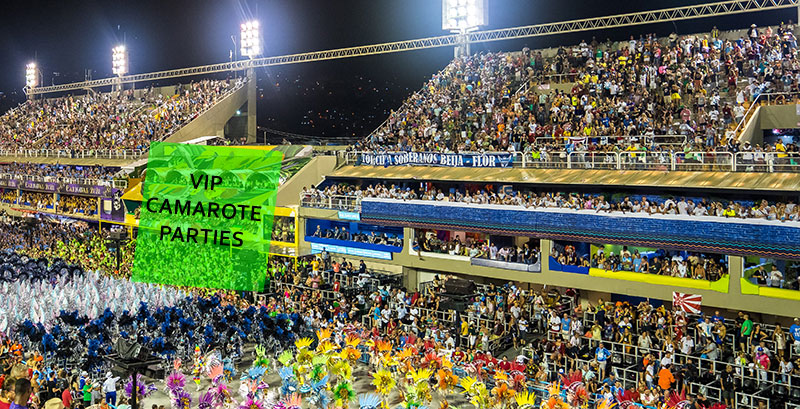 What is the difference between the Numbered Sections? 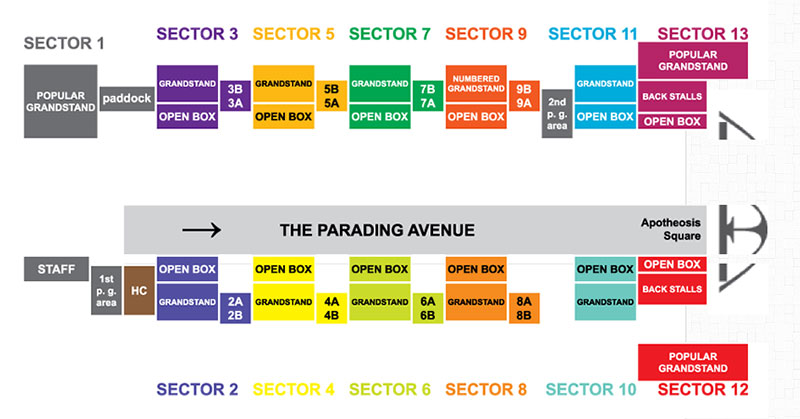 This picture is a great example of the different sectors. Sector 1 isn’t pictured is at the beginning of the parade and is located right where the Samba School get together to prepare for the Parade before it starts. These tickets are not for sale and are given by the schools to the community. Sectors 2 & 3 are the least expensive sectors because they are located at the beginning of the parade where the Samba Schools are just warming up.

The Sectors located in the middle towards the end (from sector 4 until 9) are the most privileged ones, with the best view of the show, but they can also be the most expensive ones. Sector 8 and 9 are probably the best, and its where most of the judges’ seat during the show, what make the performance of the school much better when they reach this area. These Sectors also have allocated numbered seats.

Sector 12 and 13 have numbered chairs (back stalls), which offers you the comfort of having your seat spot guaranteed for the whole night. The bad thing is that if you are not in the first row, you will have difficutly seeing because people are sitting in front of you. They are located at the end of the avenue, so depending on where you seat, you might not have a full view of the show and by this point, there’s no more judging happening of the School performance, what can affect the quality of it.

Notes: Pricing depends on the availability and is only guaranteed once a reservation is made  * Sections 3/5/7 are not numbered seats they are “first come-first serve” *Section 9 are numbered. Box seat & VIP Box pricing available upon request..****