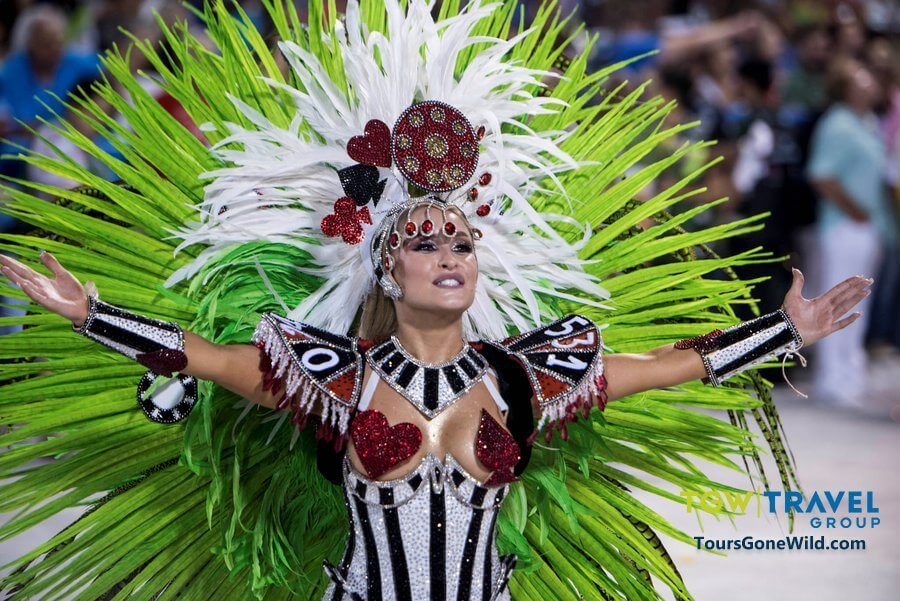 We have been offering Carnival in Brazil since 2004 and our clients always ask us great questions. We put together a top 10 of Rio de Janeiro Carnival FAQs.

1) When is the Carnival? – Rio de Janeiro Carnival, Brazil, happens every year the week before Lent. (At the same time as “Mardi Gras” in the USA). Typically it occurs in February of every year but can start at early as late January or in early March. Check out the Rio Carnival Dates for every year.

Bloco Street Parties:  Carnival Bloco Street Parties (or translated to “Block Parties”) are free to attend and happen during the day from the morning all the way up to sunset. People dress in informal costumes (much like Americans and westerners do during Halloween) and dance on the streets where live music is played.  People sing, dance and drink and let loose.  There are blocos in virtually all neighborhoods in Rio and we distribute a written guide to our guests as to the best ones do attend as they vary greatly in terms of composition and age of crowd, type of music, size of event etc.  The blocos vary in size from a few hundred to a few hundred THOUSAND people. They are a quintessential part of attending Rio Carnival and we do recommend at least checking out one bloco street party throughout your stay. Rio Carnival Bloco Street Party pictured below: 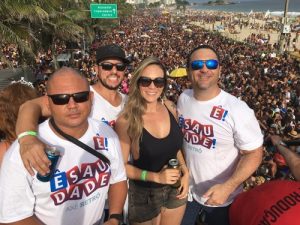 Private Carnival Parties:   The second way Brazilians celebrate Carnival in Rio is by attending private Carnival parties.  Parties are held at some of Rio’s top upscale venues and generally are outdoors . They typically feature local Samba music and can be held during the day, such as in the case of a Brazilian Feijoada or Barbecue or at night on famous landmarks in  Rio de Janeiro. click HERE for more information regarding parties.  VIP Carnival party pictured below. 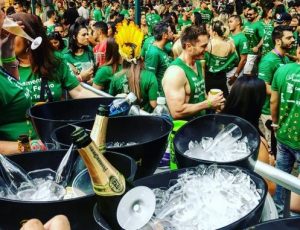 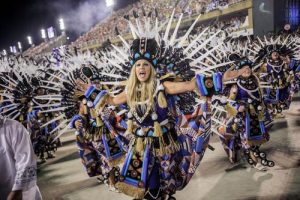 3) Do I have to purchase tickets for the Rio de Janeiro Carnival?  – Yes, you do. The Carnival in essence is the famous parade and competition held at what is known as the Sambadrome (Sambodromo in Portuguese). It is a long street with bleachers and VIP boxes on each side of the street where the Samba Schools, which are groups of thousands of people in local and folkloric costumes and floats, compete nightly during the Carnival. The Sambadrome is closed off and a private venue so you must purchase tickets to watch the show. 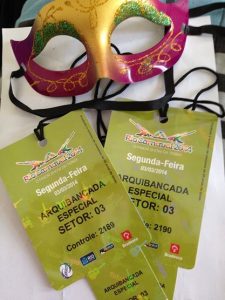 4) When should I go to the Sambadrome? – There is a parade at the Sambadrome on Friday, Saturday, Sunday, and Monday nights at the Sambadrome. The first two nights feature samba schools and floats that are not top tier.  It is thus recommended to go the samba parade on either Sunday or Monday as these are the actual schools that compete for the title each Carnival. Since there are too many samba schools to compete all in one night, they are divided between Sunday and Monday nights. Unless you are wanting to see a particular samba school on one of the two nights, either night (Sunday or Monday) is generally very similar.

6) What do you do on the other nights/days? – TGW takes its guests to exclusive parties on Friday and Saturday, as well as Tuesday of Carnival (the nights OTHER than the Sambadrome), and has awesome options where locals typically frequent. We also recommend checking out the “blocos” which are the free street parties all around Rio de Janeiro at least once during Carnival. For more FAQs on parties and activities click HERE. 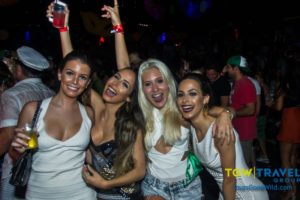 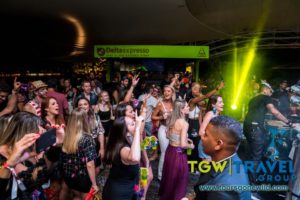 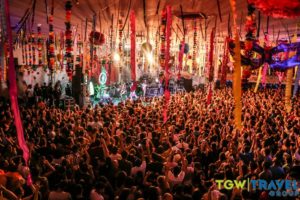 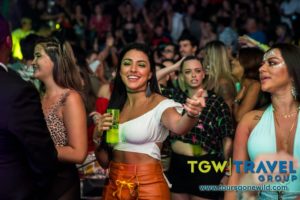 7) What kinds of Carnival tickets are available? – The Sambodrome has three different general types of sections. The First is Bleachers/Grandstands (“arquibancadas” in Portuguese). These are bleachers. The bleachers are divided into numbered sections. The second type of ticket is called Open Boxes (“Frisas” in Portuguese). They are street-level seats where you can see the Carnival parade and floats up close. The final type is the Covered VIP Boxes  (called “Camarotes” ) they are the equivalent of a corporate VIP box at a stadium where food and drinks are included as well as security and are quite expensive and exclusive. click HERE for more information regarding the various sections in the Sambadrome.

8) What tickets should I buy? – As far as the bleachers are concerned, we recommend sections 3,5, 7 or 9. The higher the number, the closer to the middle of the “Sambadrome” avenue and better the view.  If you are on a tight budget, we recommend Section 3 or 5. If your budget permits a bit more, we recommend 5 or 7. Section 9 is the “tourist” section and the ONLY grandstand section that features actual numbered seats.  If you would like to splurge, we recommend Covered box seats (starting at about $700 to $1k range per person) or Camarotes if you are on an unlimited budget (over $2k per person). Bottom line – GO to the Carnival and purchase tickets that fit within your budget as it would be a shame to go to Rio and NOT see the Carnival!

9) Should I purchase section 9 tickets that are numbered? – This depends on the client. If you are not good being around a lot of people then YES this is a good idea. The other bleacher sections, 3,5,7, etc are NOT numbered. This means they are on a “first-come, first-serve” basis and it can be difficult to find a spot at the beginning of the night. These sections also tend to be livelier as more Brazilians frequent these sections and are singing and dancing! If you have a problem being with a lot of people or don’t want the hassle of finding a seat then we recommend the section 9 seats, otherwise, you are probably good with the other sections.

10) Can I parade inside the Sambadrome in Costume? – You definitely can! This is a very unique and amazing experience! To do so, however, you must purchase a formal costume which is made by the local Samba school which is competing. Costumes are quite expensive as they are hand made/crafted and take months to make. (you also get to keep the actual costume). Costumes for the Carnival vary in pricing but typically start at about $500USD per costume to over $1,000USD. If you do not want to spend this sort of money and do want a cool experience, you can dress up and have an amazing time in the informal “blocos” (street parties) that happen every day around Rio during the Carnival.  All TGW guests receive a customized list of the best blocos to attend as there are hundreds of them and it can be difficult to choose the best ones.

For more information on Carnival or for current pricing, please click here